There are two network connections that the throttle must make in order to communicate to your command station: A WiFi connection and a Server connection.

Tip: Some devices like Digitrax LNWI and MRC WiFi Module function as both the WiFi and the Server simultaneously.

This section will help you troubleshoot your network connection after a “No WiFi found” error. If no WiFi is found, there are a few likely causes:

Problem: Your router or WiFi network is not turned on or is otherwise in-operational.

Solution: Restart your WiFi device or router, and check for error messages or warning lights.

Problem: I do not see my WiFi name listed in the options to connect.

Solution: The UWT-100 communicates over WiFi via the 2.4 GHz band. If your router is dual-band or 5 GHz band only, you may not be able to see that network. Both battery life and WiFi range are improved when communicating on the 2.4 GHz band. If using a computer interface like JMRI, make sure the computer is connected to the same 2.4 GHz network that the throttle is connected to.

Problem: You have not yet connected to a WiFi network.

Solution: Follow the steps in the Connecting to a WiFi section to establish a connection. 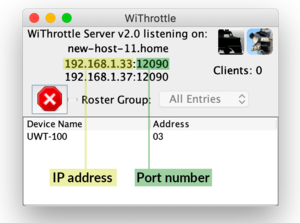 This section will help you troubleshoot your server connection in the event the 'Server not found' prompt is displayed.

Solution: Reboot your computer and command station, open JMRI, and start the WiThrottle server [Top menu: Actions > Start WiThrottle server]. Once complete, select "Try Again" on the throttle. If you are running JMRI on a Windows PC, make sure JMRI is allowed through the Windows Firewall or the throttle will not connect.

Problem: Command station does not respond to throttle input.

Solution: If your throttle is on and appears to be operational, but there is no response from your command station, restart the command station and check your power and data connections.

Solution: Use the menu option labeled 'Auto-detect LCC/WT' or 'Change LCC/WT Mode' and select the correct connection mode. An asterisk (*) will appear next to the active mode.

Tip: Until TCS releases the Command Station, JMRI, LNWI, and all other potential connections communicate via the WiThrottle protocol. If your connection mode is set to "LCC" for the connection to your layout, change this to "WT" for WiThrottle protocol. LCC mode will be directly supported by the TCS Command Station and other LCC devices, and is currently used for throttle firmware updates with the TCS DEPOT software.

If you are unable to establish a connection with your LNWI device, follow the steps below:

1. As simple as this sounds, turning the LNWI device off and on again will often solve connection issues.

2. Ensure that the number of connections to a specific LNWI devoce is not greater than four. LNWI devices have a limit of four connected devices at one time - including phones running apps like WiThrottle and Engine Driver. Turn off or disconnect one of the devices connected to the LNWI and see if the problem disappears.

3. Check that your saved LNWI device is turned on. In situations where there are multiple LNWI devices in use, the throttle may be configured to connect to one that is not available.